Airborne odors and contaminants can come from a variety of sources and are not only annoying, but potentially have a negative impact on health. The environment for the incubation of any kind of odor-causing bacteria are often places where little ventilation exists, the temperature is warm, and a degree of humidity prevails. Sometimes these odors can be so pervasive that traditional cleaning methods like added ventilation, UV light, or an air purifier simply does not work. In commercial or industrial settings, these odors can also affect the safety and performance of workers. When organizations are confronted

with potentially harmful odors, ozone is often the most effective method to remove them.

Other technologies, including the use of UV-lamps and chemicals dispersed as an aerosol, are limited greatly by the need for greater exposure time, an inability to reach isolated spaces, the toxicity of the chemicals, or the ineffectiveness on certain pathogens. Ozone has none of these limitations. It is used in many applications to improve the air quality, including odor control in factory or industrial settings, food storage applications, virus, bacteria, and cyst control, disaster restoration, and mold remediation or prevention. And ozone can efficiently and effectively disinfect large air volumes.

How do ozone generators remove odor?

Ozone generators produce ozone by breaking oxygen molecules (O2) apart so that singular oxygen atoms (O) can bond with other oxygen molecules to form ozone (O3). This is done either through corona discharge, which utilizes electricity to split the oxygen molecules, or by UV light. The ozone molecules then attach themselves to organic material, such as bacteria, fungi, microorganisms, and certain insect larvae. Oxidation takes place, breaking down the structure of these odor-causing materials, sterilizing them and neutralizing the source of the odor. There are two primary methods of treating a space with ozone to address airborne bacteria, viruses and mold: Shock Treatment and continuous low-level treatment with HVAC Mounted Systems.

The most common treatment for residential and commercial applications is shock treatment. Shock treatment uses an ozone generator to create high levels of ozone in an enclosed, controlled room or building. The process takes a short period of time, generally between several minutes and several hours depending on the size of the room and the generator output. This type of treatment can be used to effectively kill bacteria, viruses, and pathogens that may cause odors. For safety reasons, the affected area must not be occupied for the

duration of the exposure, and for a short period afterwards to allow the ozone to dissipate.

HVAC Mounted Systems can eradicate the same issues as shock treatment but do so in a different manner. This type of system uses an ozone generator specifically designed to be mounted in the duct of an HVAC near the furnace or A/C system. This allows for treatment of an entire home or office with a single ozone generator. It is deal for use in homes, offices, and any buildings that have some sort of air handling system with ductwork. With an HVAC system, ozone is produced at levels acceptable for human occupied spaces. Monitors ensure that the levels remain far below OSHA regulations. The disinfection process takes longer but helps prevent the original problem from returning.

Effectiveness of ozone on bacteria and viruses

For most applications a bacteria reduction of 99.99 % (a 4-log reduction) is attainable. When a higher deactivation grade is required, exposure time can be increased, or the dosage may be increased. 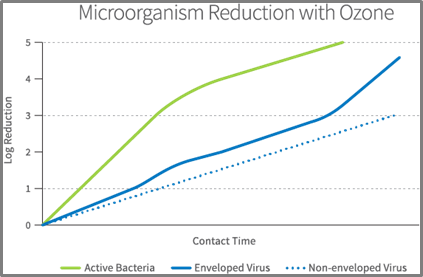 Depending on specifications of the bacteria or virus, the treatment time and ozone concentration is adapted to reach the desired log reduction. After finished treatment ozone either decomposes into oxygen naturally over several hours, or the decomposition is accelerated significantly by the use of an ozone destruct unit.

Benefits for Air Treatment and Odor Control with ozone