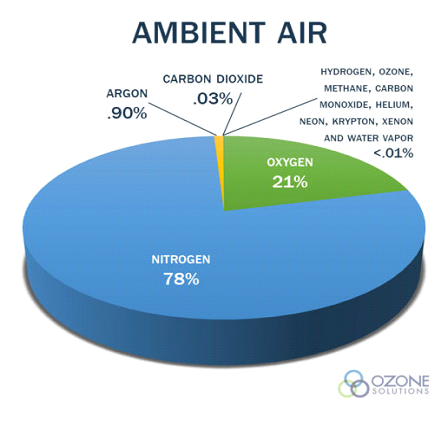 Ambient air consists of many gasses. Of that mix, only about 19% of it is oxygen.

Many applications of oxygen will require a higher percentage than 19%. That is where concentrated oxygen fills the need. Concentrated oxygen refers to oxygen which is a minimum of 90% pure with moisture removed to a -100° F dew-point. It can be produced from an oxygen concentrator or delivered in a pressurized cylinder bottle.

There are a few methods used to produce the concentrated oxygen:

This system operates on a similar principle to the heatless desiccant dryer in that air is pressure fed to a molecular sieve. The selected media will be pressurized to then absorb nitrogen, moisture, hydrocarbons and CO 2, leaving oxygen to flow through. When the pressure is reduced, the vapor, 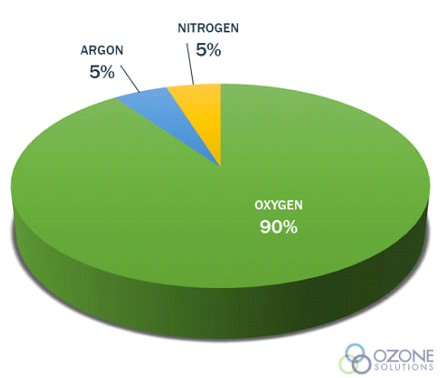 nitrogen and other gasses are dispersed and removed by the purged gas. The product gas contains about 90-95% O 2 and a few percent each of nitrogen and argon. (Most small oxygen concentrators use the PSA method.) Other methods of on-site oxygen generation include vacuum swing adsorption and cryogenic treatment which will not be addressed.

All concentrated oxygen is really the same and needs to be generated from oil-free compressors / liquefiers because any oil (or whatever nature) is highly flammable in 100% oxygen. The difference between the four various oxygen grades ( Aviation, Medical, Welding and Research,) is not in the quality of the oxygen but rather, the custody chain of the tanks.

If a welding tank is used, but it's a rotated or swapped out tank, you will not know if the tank has been left open, allowing contaminants to enter the tank. To then use that tank for medical applications would not be good, as impurities could be expelled from the tank.

One solution is to buy a new oxygen tank, tag it in some manner, and when it is filled or refilled, demand your personal tank back. You will then establish a chain of custody. The oxygen can be considered medical grade because you started with a clean tank having no contaminants. Because oxygen is considered to be a prescription drug, the FDA is enforcing the chain of custody for the protection of the patients who need bottled oxygen. Companies that fill / refill medical bottles need to be registered with the FDA and will need to comply with cGMP parts 210 & 211. Currently, the cGMP regulations require the company that fills the cylinders to either own the cylinders or to have written permission of the owners of the oxygen cylinders. Proper pre-fill inspections, labeling and testing are also required.

If you are using an oxygen concentrator and that machine is being properly inspected and maintained, such as replacing the air compressor's air filter(s) and periodically checking its oxygen output purity with an oxygen meter, that machine will be producing the same grade of oxygen as bottled oxygen. 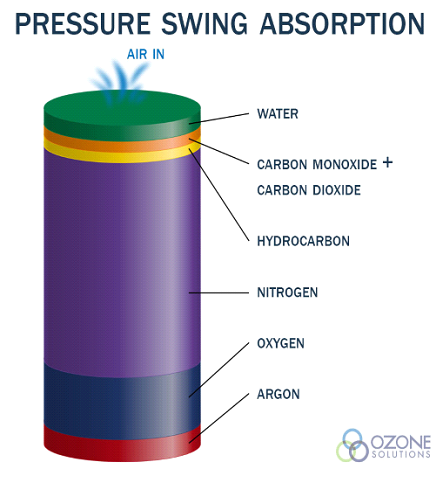 If you are switching oxygen bottles as listed above, then you are susceptible to impure oxygen due to the contaminants entering the tank. If you want purer oxygen, maintain the chain of custody!

The characteristic of molecular sieve crystals to deferentially adsorb the gasses comprising of air make oxygen concentration possible in devices of small-scale and modest power consumption. The efficiency of the process is promoted under conditions of higher pressure, lower temperature and higher concentrations of the gasses to be adsorbed.

As air flows through a column (or bed) of molecular sieve, the component gasses it contains are adsorbed and stratified in the order of their relative affinity to the molecular sieve material.

The process may continue until the next to last gas component stratifies near the end of the bed. Once the full bed length is used, the bed must be regenerated by desorbing (or purging) the adsorbed gasses. Purging is accomplished by reducing the pressure in the bed and back-flushing with some of the concentrated gas product. Adsorption and desorption are completely reversible processes and can be carried out indefinitely. If properly cycled through the adsorb-desorb process, molecular sieve beds never "wear out" or become "clogged."