How Ozone is Produced

There are basically two methods of producing ozone:

Corona discharge creates ozone by applying high voltage to a metallic grid sandwiched between two dielectrics. The high voltage jumps through the dielectric to a grounded screen and in the process, creates ozone from oxygen present in the chamber. This also occurs naturally during lightning storms.

Ultra-Violet (UV) light creates ozone when a wavelength at around 185 nm (nanometers) hits an oxygen atom. The molecule (O2) splits into two atoms (O) which combine with another oxygen molecule (O2) to form ozone (O3.) This also occurs naturally through the sun rays.

As soon as ozone is formed in a generator and dispersed in a room, some of it reverts back into oxygen (O2.) This step occurs by several processes including the following:

Oxidation reacts with an organic material such as odors or smoke. Reactions with bacteria, etc., which again consumes ozone by oxidation reactions.

Additionally, ozone breaks down thermally. Higher temperatures destroy ozone more quickly than lower temperatures. The ozone that remains is referred to as Residual ozone. "Residual" ozone has a half-life of about 30 minutes; this means created ozone will return to oxygen usually within 30 minutes, in amounts equal to half its level. In other words, for every 30 minutes that goes by, half of the ozone that was there initially has been converted back into oxygen. So if there were 32 grams of ozone and you waited 30 minutes, there would be 16 grams left. Another 30 minutes will leave you with 8 grams. This sequence continues until virtually all of the ozone is converted to oxygen. In practice, the half-life is variable, depending on many variables such as temperature, dust, other contaminants in the air and humidity.

Therefore, ozone - while powerful - doesn't last long. It does its job and then disappears back into safe, clean oxygen.

How Does Ozone Work

The third oxygen atom of ozone is extremely reactive because it is unstable. This atom readily attaches itself to other odor molecules. When contaminants such as odors, bacteria or viruses make contact with ozone, their chemical structure is changed to less odorous compounds. Ozone not only destroys bacteria cells, but it does it without leaving a residual effect. See the effects ozone has on bacteria in the pictures below. 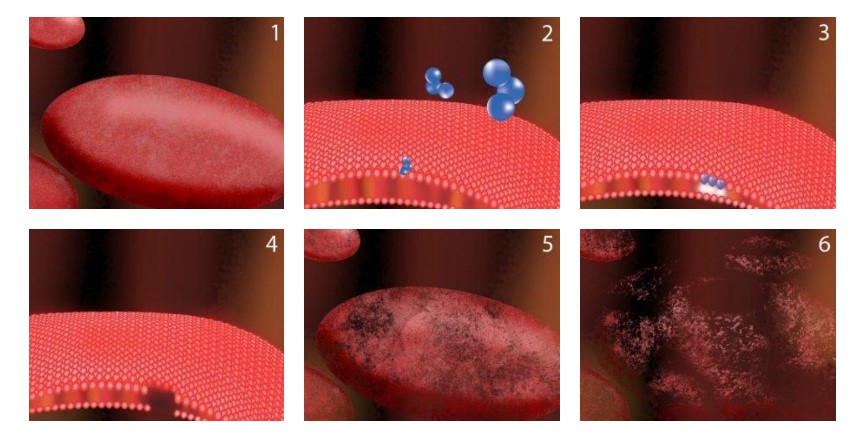 Several regulatory agencies, including the Occupational Safety and Health Administration (OSHA,) have stipulated that the safe allowable level of residual ozone is 0.1 ppm (parts per million.) Note that this permissible level is for continuous exposure throughout an entire 8 hour day. The temporary effects of such a low exposure would range from headaches to sore throats and irritation in the eyes and nose. No long-term effects have ever been documented from ozone exposure. Ask Ozone Solutions for a Material Safety Data Sheet (MSDS) if desired.