Apple processors face increasing needs to reduce the risk of spoilage from bacteria, molds and fungi. At the same time they need to conserve water and reduce waster-water disposal costs, particularly the costs associated with high biological oxygen demand (BOD) and suspended solids (SS). Using ozone to treat the water that conveys and washes the apples can meet the challenge.

Tastee Apple is a privately owned processor of fresh apples, located in Newcomerstown, Ohio. The plant is one of the major packers in the US of caramel apples. These are fresh apples on a stick, which are coated with sweet brown or red caramel and dipped in with chunks of peanuts or coconut. The plant also produces apple juice and apple chips.

Typically, Jonathan or Empire apples arrive from the field or storage rooms in bins, which hold about 950 pounds (430 kg) of apples each. To avoid bruising apples during handling, the plant uses a water flume to float the apples out of the bins, to transport the apples towards a conveyor for further processing, and - at the same time - to wash them. The 2000 gallon (7600 l) flume at Tastee Apple can handle about 40,000 apples per hour.

The recirculating flume water was chlorinated to control microorganisms. It had to be dumped daily, primarily because it accumulated high levels of soil and organics that had been washed off of the apples.

In the summer of 1998, the plant decided to improve the quality of the apples shipped to customers and at the same time reduce the use of water and the amount of BOD discharged to the publicly owned treatment works. To get away from chlorine use and to extend the use of the water, the company installed an ozone treatment system in the flume water.

Water is circulated through the flume at about 600 gpm (2300 lpm). To ozonate the water, a side stream of about 60 gpm (230 lpm) is first filtered through an 80µ filter with intermittent backwash capability. After filtration, gaseous ozone is injected into this side stream. The ozone is generated in a 5 lbs/day (2.3 kg/day) corona discharge unit, which is 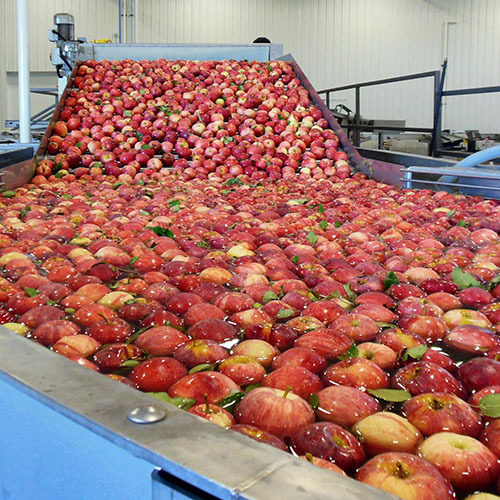 fed with dried air. After about 10 minutes of exposure to the ozonated water, the apples are conveyed to a size grader, an inspection belt, and to the equipment that inserts the stick and coats the apples. Three apples are placed together into a display package.

No longer is flume water replaced daily. Now the company can reuse the same water for a whole week, saving more than 12,000 gal/week (45,000 l/week). Since the ozonation system is running 24 hours a day, it is able to reduce the BOD load in the flume water - particularly during the night when apples are not being washed - to less than 50 mg/l.

The ozone treatment reduced the yeast and mold count in the water, resulting in cleaner apples and a longer shelf life for the caramel apples. As a result, fewer complaints of moldy apples have been received. As one more benefit, workers sorting the apples noticed that their rubber gloves remained clean throughout the day and did not build up a sticky coating as had happened prior to ozonation. However, the seals in the bearings of the original conveyor and automatic valve in the filter were not made from ozone resistant material and had to be replaced after a few weeks of operation.

To obtain a general idea on the performance of the equipment, challenge tests were performed with apples that had been dipped into a yeast suspension of S. cerevisiae and then washed with ozonated water. Each apple was rinsed in 100 ml of sterile water and then a yeast count was taken on this water. The results are presented in the table below.

The data show about a two to three-log count reduction. Subsequent spraying with super-saturated ozonated water with 1-3 ppm of ozone would further reduce the yeast count.

What Did it Cost?

The Role of the Electric Utility

American Electric Power (AEP) provides electric service to Tastee Apple. To help further the use of ozone technology, AEP and EPRI shared the cost of the equipment with the company and helped evaluate the effectiveness of the equipment.

Other Applications of Ozone

In the 1998 season, apples at Tastee Apple were sprayed with ozonated flume water, having an ozone concentration of approximately 0.1 ppm. While this concentration kept the yeast and mold count in the flume water under control, a further reduction of the yeast and mold count on the apples would be achievable through final spraying of the apples with super-saturated ozonated water while they are tumbling underneath a spray bar. To do this, the plant plans to install an additional 2 1/2 lb/day (1.1 kg/day) generator plus an ozone contactor tank.

Other apple processors are already running their flume operation with ozonated water or are in the process of installing a new treatment system, eliminating the use of chlorine. Equipment sanitation and the use of gaseous ozone in apple storage are additional emerging applications for ozone. A low concentration of ozone in the air during storage will reduce yeast and molds on the surface of the apples and on building structures. It also allows better control of the ripening process, probably by oxidizing ethylene generated by the apples that hastens ripening.

Other food processors are installing or considering ozone applications. For example, strawberry and cherry processors have had good success in sanitizing fresh fruit and extending their shelf life by spraying their fruit with super-saturated ozonated water in the order of 1 to 4 ppm ozone concentration.