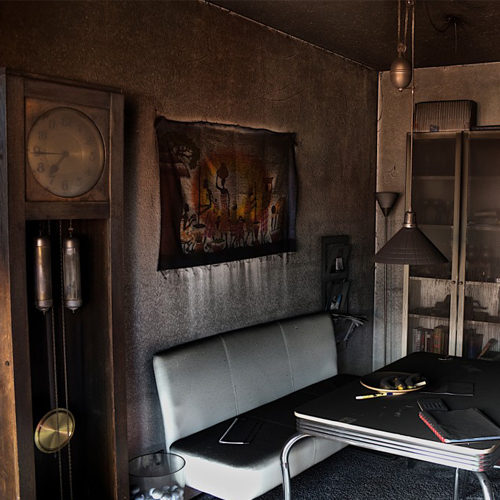 Nothing Works Better than Ozone

Ozone machines can be a valuable tool for fire restoration. Ozone infiltrates carpet, furniture, ventilation ducts and cracks to destroy the smoke smell.

The Responsible Use of Ozone in Fire Restoration

Ozone (O3) or enriched oxygen, is a powerful oxidizing gas that has been in use since the early 1800's. Ozone is sometimes referred to as "triatomic oxygen" since it contains three atoms of oxygen rather than two.

Ozone occurs quite readily in nature, most often as a result of lightning strikes that occur during thunderstorms. That "fresh, clean, spring-like rain" smell that we notice after a storm most often results from nature's creation of ozone. We are probably most familiar with ozone from reading about the "ozone layer" that circles the planet above the earth's atmosphere. Here, the ozone is created by the sun's ultraviolet rays and then serves to protect us from the ultraviolet radiation. Ozone is produced commercially by the use of ultraviolet light and corona discharge.

In relation to the property and casualty restoration industry, ozone gas generation is most utilized to remove odors in

clothing caused by bacteria and smoke. In this case, an ozone room is used where all odorous clothing is hung on racks and exposed to ozone gas for 24-48 hours, depending on odor severity. The ozone generator is left outside of the room and a short connecting hose allows the ozone to flow into the room. Ozone is slightly heavier than air and will only stratify in very calm environments. The diffusivity of ozone allows it to spread readily throughout a room. It is advisable to place a small circulating fan in the room to help the gas to dissipate and penetrate well.

Although ozone is very powerful, it is very unstable and begins to decompose instantly. Its half life ranges from a few seconds to several hours. When ozone comes in contact with organic compounds of bacteria, the extra atom of oxygen destroys the contaminant by oxidation. Ozone decomposes to oxygen after being used so no harmful by-products result.

Ozone will neutralize virtually all organic odors, specifically those that contain carbon as their base element. This will include all the bacteria and fungus groups as well as smoke, decay, and cooking odors. Ozone is not as effective on inorganic odors like ammonia, phosphates, nitrates, sulfates, chlorides, etc.

Ozone is a toxic gas. However, it can be used safely when deployed by specialized generators under proper considerations. The odor of ozone is detectable by some people at a level of 0.003 - 0.015 ppm and becomes intolerable to most people at 0.15 ppm. The general consensus is that when you can smell gaseous ozone, it's time to evacuate the area of life forms. Ozone use is regulated by OSHA, Occupational Safety and Health Agency, and it has stipulated that the safe allowable level or residual ozone is .1 ppm as a weighted average for an 8-hour day. Over exposure to ozone affects our respiratory system. Symptoms such as watery eyes, coughing, heavy chest and a stuffy nose will indicate that the gas is reaching high levels.

One of the most positive features about ozone is that it performs its work, and the reverts back to normal oxygen. However, other safeguards must be observed besides evacuation. Due to its oxidizing nature, ozone attacks and degrades natural latex rubber, thus a laminate like silica should be applied to car and freezer moldings. Ozone oxidizes faster in the moisture.The benefits of using ozone for restoration work are fantastic. Smoke odor molecules that infiltrate all porous surfaces can be permanently removed by ozone gas. Only ozone will work on the most stubborn of all odor molecules, that being protein. Odors associated with dead bodies, and other forms of decay, like freezer failure have long resisted normal chemical deodorizing attempts. Ozone again has the potency to neutralize even these contaminants.

Generators for everything from small rooms to large scale disaster recovery. These generators can produce 3,400-10,000 mg/hr of ozone production. With their simple operation and compact size, they are perfect for disaster recovery.