A reduction in beer quality may arise from biofilm development in beer lines. Regular cleaning is, therefore, essential. A comparison between traditional chemical cleaner and ozonated water was made using a model dispense system, challenged with organisms isolated from a brewery (Enterobacter and yeast). The effect of each treatment on survival and biofilm formation at four sites in the model was investigated. Both systems reduced biofilm from initial levels by 3 (ozone) and 2.7 logs (chemical).

Non-recirculation of media mimicked the effect of biofilm formation up on the microbial load of dispensed beer. Ozonated water gave a significantly higher reduction than chemical cleaner. Ozonated water also resulted in a reduction in microbial counts, with the exception of the fob detector, during a dispense protocol that mimicked normal-use conditions. Ozonated water has the potential for use as a cleaning and sanitation agent for commercial beer lines as it leaves no residues, preventing possible product taint.

In the commercial brewing industry the desire for a high quality product can be hurt by wild yeasts and bacteria which can build up in the tubing surfaces that beer passes through. These organisms collect on the tube surface, known as a biofilm, and are resistant to many commercial cleaners, resulting in a build-up of bacteria at a level that damages the product. Ozone’s oxidizing ability destroys microorganisms and can break down the structure of a biofilm, resulting in cleaner beer lines and a higher quality product. 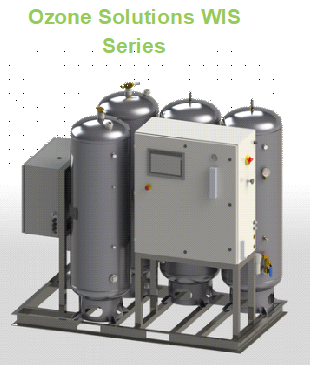 In the study two identical models were created, designed after a standard beer line, with identical conditions in both. In one model a chemical cleaner was used and in the other ozone which were both pumped through the lines with an air compressor and gas pumps. After cleaning, a sample was taken of each, and the test results showed that ozone was more effective than the commercial chemical cleaner in reducing the amount of bacteria. The level of contamination was significantly lower in the lines that used ozone as a cleaner allowing for a larger period of time between cleaning. 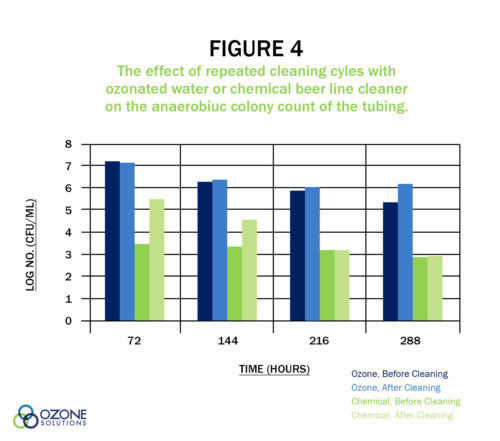 Ozone can be used as a substitute to more standard commercial cleaners used in cleaning beer lines and has even shown to be a more effective means of cleaning. It leaves no deposits in the system so the composition of beer is not altered.

A more effective means of cleaning beer lines leading to a reduction in organisms and biofilms, and can result in better quality product for customers. The use of ozone results in better tasting beer.