End of the year savings - New, Rental, Lease or Service. Call 888-892-0303 to speak to an Ozone Specialist about your process needs.

Ozone is widely used for the elimination of microorganisms from drinking water and swimming pools. 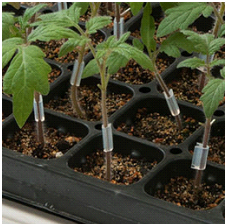 Efforts were made in this study of soil treatments to replace methyl bromide, because of its well-known environmental impacts, with ozone or ozone in combination with biological product (Trichomic) based on Trichoderma spp. Ozone was applied by ozonation of water to the concentration of 4mg/l before planting and, in some cases, after planting. The biological product was applied alone or in combination with ozone at the dose of 0.5 ml of Trichomic per m2 soil area. The experiment was done in an unheated plastic greenhouse with tomato cultivation. Estimation of treatment effectiveness was based on fruit production and daily growth of plants, as well as on the percentage of plants with corky root, Fusarium foot rot and/or Fusarium wilt. Fruit production was increased by 39.7 and 40.4% respectively, when ozone was used alone either before, or before and after planting. Increases in fruit production where the biological product Trichomic was used alone or with ozone ranged from 39.2 to 40.5%. The highest plant growth rate was observed where Trichomic was applied after ozone. The lowest percentage of diseased plants was observed following double applications of ozone or ozone followed by Trichomic.

In attempt to increase plant sizes and plant production, chemicals are used to reduce soil borne diseases, weeds and pests. Many of these commonly used biocides, commonly methyl bromide are considered harmful to the environment and ozone layer. The harmful effects of these biocides have led to research into alternatives that are more environmentally friendly. Ozone because of its natural composition is considered a safe alternative and tests have shown that it can effectively improve plant production, typically in the form of mulch or as an additive to irrigation water.

A test was performed in an unheated greenhouse with the growth of tomato plants. Three 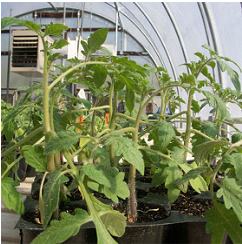 These tests showed that in plants treated with ozone, the ozone killed plant pathogens and controlled weeds. Fruit production was increased between 39% and 40% when used alone either before or after planting. Diseased plants decreased when ozone had a double application along with Trichomic, a biological product. Ozone is an environmentally friendly product that can easily be applied to the soil and replace harmful chemicals.