Monkeypox is a viral zoonosis (a virus transmitted to humans from animals) caused by an infection with the monkeypox virus. It was discovered in Denmark in 1958, when two outbreaks occurred within colonies of monkeys kept for research. Characteristics of monkeypox are very similar to smallpox, but it is clinically less severe. Symptoms may include fever, headache, muscle aches, swollen lymph nodes, and a rash that can look like pimples or blisters.

Monkeypox in humans was first identified in 1970 in the Democratic Republic of the Congo. A 9-month-old boy became infected with monkeypox in a region where smallpox had been eradicated in 1968. Since then, 11 African countries have reported human monkeypox cases, and in 2003 the first case was found outside of Africa, in the United States. Recently, monkeypox has been found in Israel, the United Kingdom, Singapore as well as the United States, leading many to worry that it may become more transmissible.

How is monkeypox transmitted?

Monkeypox is primarily transmitted through close contact. Animal-to-human (zoonotic) transmission can occur from contact with blood, bodily fluids, or mucosal lesions of infected animals. Although the first known occurrences were in monkeys, many animals can catch monkeypox; rodents, rabbits, monkeys and apes can contract the virus.

Human-to-human transmission results from close contact with skin lesions or respiratory secretions of infected people. Human-to-human transmission usually requires prolonged periods of close contact but can also be spread via objects an infected person recently contaminated. This could be an object the infected individual sneezed on, or bedding that has been recently slept on.

*Although we know a lot about monkeypox, more research is still needed. We do not know if monkeypox can be spread solely through sexual contact, eating undercooked meat of infected animals, or even how monkeypox is naturally spread in the wild.

Monkeypox results in fevers, headaches, rashes, and nasty lesions. Ozone has been proven to kill bacteria, mold and viruses through an oxidation process which absolutely destroys the pathogen. While research on monkeypox is still incomplete, there is data on a close viral relative: fowlpox. Fowlpox is in the same family as monkeypox, (Poxviridae) but it is in a different genus - primarily affecting birds. In a paper published 10th July 1995 by R. Perez-Rey, H. Chavez and C. Baluja, total inactivation of ten microorganisms was achieved, including the fowlpox virus. Not only did these scientists find ozone could totally inactivate all the microorganisms tested, they found it to be economically advantageous – even back in the ‘90s! Here is a general guide of viruses, molds and bacteria which have already been tested to give you an approximate idea of how much ozone would be needed and for how long to kill a virus like this.

How Can Monkeypox Be Avoided?

Monkeypox is currently on the rise, and it is not something anyone would like to catch. While we have known of its existence for over 50 years, more research needs to be done. Since monkeypox has recently been spotted in multiple developed countries, including the U.S., and cases are on the rise, it’s a good idea to stay informed. To protect yourself from monkeypox and many other diseases, social distancing is key. Especially for monkeypox, close contact with infected people increases the likelihood of transmission.

Objects can also become infected and transmit viruses. The best way to treat infected objects is to sanitize them. There are many products one could use to do this. Traditionally, harmful chemicals like chlorine, hydrogen peroxide and formaldehyde have been used to accomplish this goal. These chemicals are often expensive, harmful to health, and can leave a surface residue. Ozone, on the other hand, is simply three oxygen molecules! This means that when ozone is applied, it does its job before quickly reverting into natural oxygen once again. In general circumstances, ozone’s half-life is 30 minutes or less, meaning that if things are bad and a shock treatment is required, you may only need to wait a few hours before it is completely safe to enter the area! 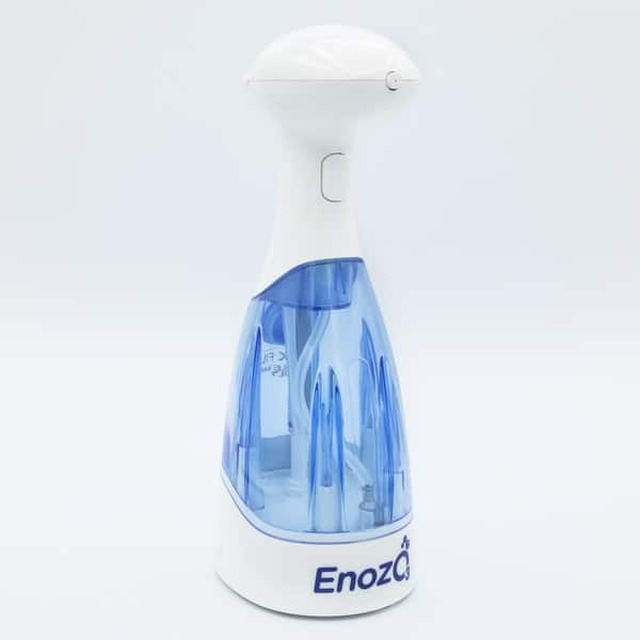 Ozone Solutions has many products, all of which do an excellent job at sanitization. A great around the house item is the Enozo Spray Bottle. This bottle creates ozone right in your hand, diffuses it into water, and you can spray it onto any surface without leaving any residue. A similar option is the SinkZone. This system takes tap water from your house and infuses it with ozone, allowing you to take full advantage of ozone’s advanced sanitation method on dishes, mopping, and any other cleaning method requiring water. One more incredibly useful product is the HVAC systems we offer. These are designed to easily incorporate into existing ductwork and can be set on a timer. Using UV light to create ozone, these machines do not take a lot of power and sanitize the air itself! This means any pathogen in the house can be eradicated easily and effectively!

Recent years have been rough when it comes to viruses, and nobody wants another pandemic. Luckily, we have learned a lot over the years and have better methods to prevent such a situation from happening again. Monkeypox may become the next Coronavirus, throwing the world into disarray, or it could be like Ebola and quickly be contained. Either way, it is a good idea to know the facts and keep yourself safe. Using simple methods like social distancing, washing hands and proper sanitization of objects and surfaces, the likelihood of another pandemic can be reduced dramatically.